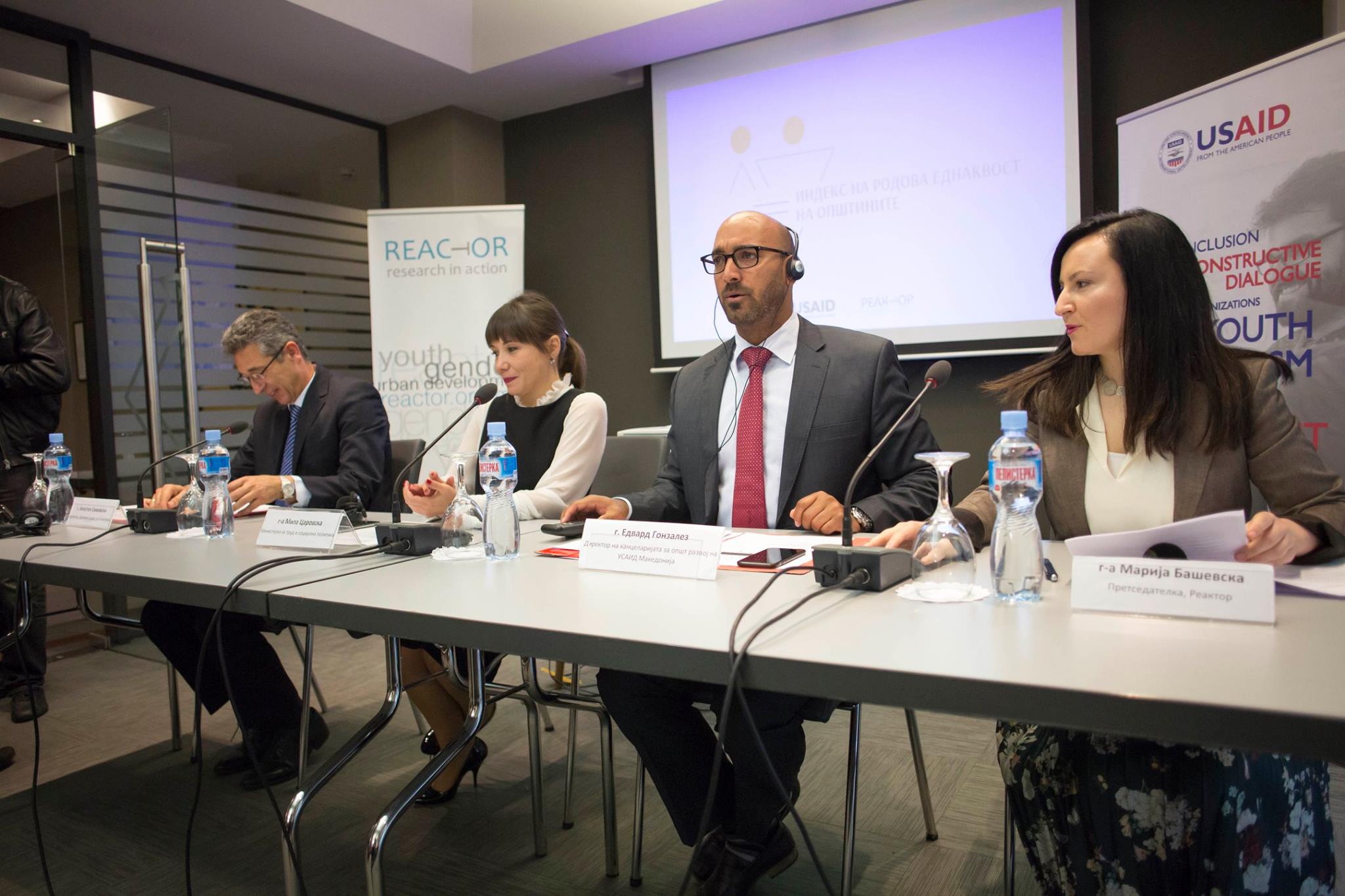 As of today, this assessment of the gender equality in the municipalities is available at www.rodovindeks.mk.

The results of the Gender Equality Index of the Municipalities in Republic of Macedonia, were presented today, October 22, 2018, at Hotel Solun in Skopje. This assesment is created by Reactor – Research in Action supported by USAID Civic Engagement Project.

Based on the belief that in order to achieve progress in the society, women and men must have equal access to opportunities and services, the Gender Equality Index provides a comprehensive overview of the status in all municipalities in Republic of Macedonia, analyzing their work in three main areas: gender gap, conditions and gender responsible municipality.  As of today, this overview of gender equality in municipalities is available at www.rodovindeks.mk. 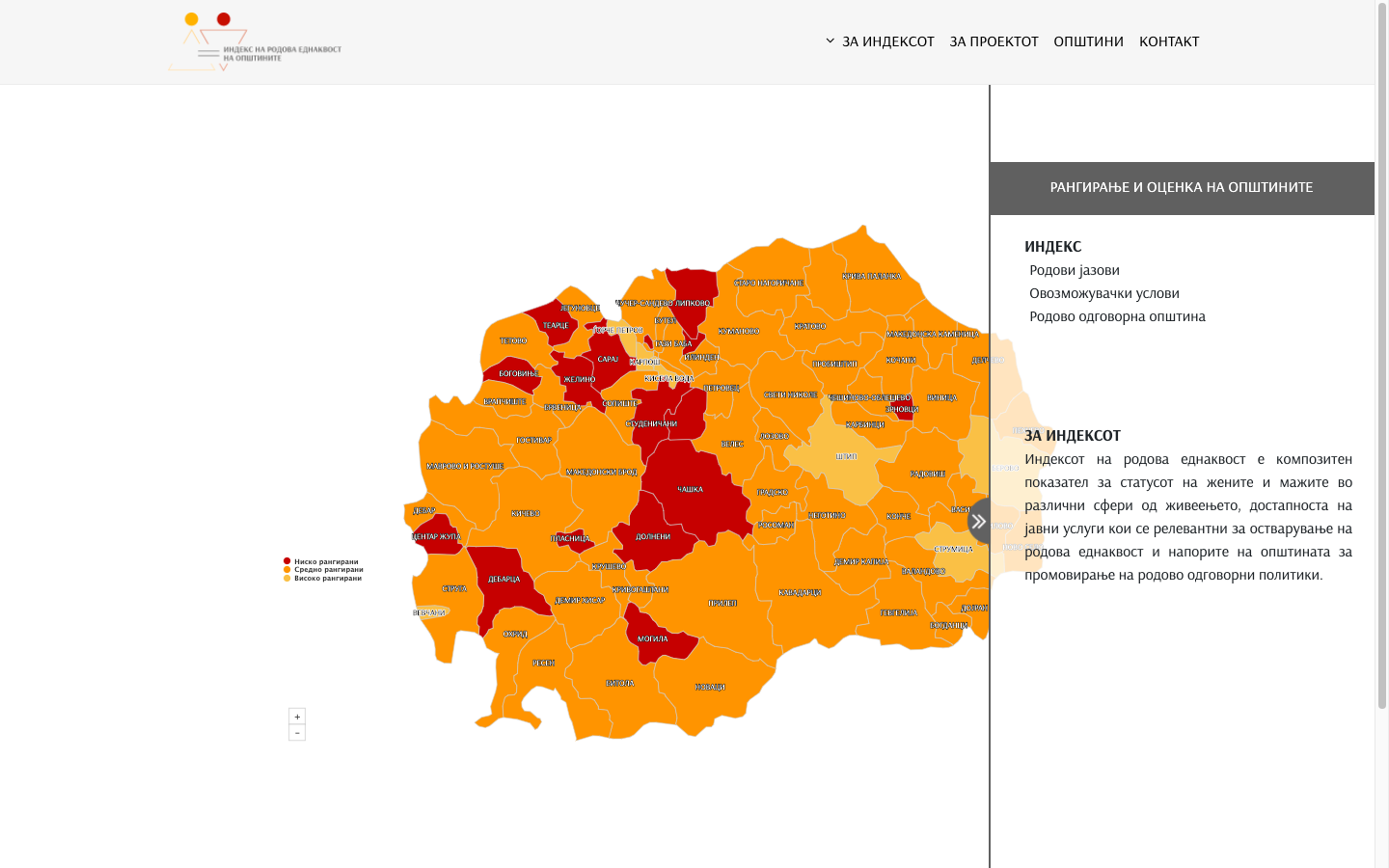 Ms. Mila Carovska, Minister of Labor and Social Policy, addressed the audience, emphasizing the importance of the existence of tools such as the Index of Gender Equality of Municipalities, in order to measure the effect of policies for advancing gender equality at the local level. “This Index, which is being developed for the first time in Macedonia, provides a basis so that we can see if we are moving in the right direction with all policies,” Carovska said. She also noted that the ministry is committed to improving childcare services, such as kindergartens, and that social protection reform envisages the development of social services, care for people with disabilities and care for the elderly, which are predominantly provided by the women in the family and because of which women do not participate in the labor market.

USAID General Development Office Director Edward Gonzalez stated: “We anticipate a better understanding of the differences between women and men in each municipality in the areas of economy, education and social conditions, as well as the services promoting gender equality offered by municipalities, such as kindergartens, nursing homes and disability facilities. The participation of more stakeholders encourages your efforts to find successful solutions to promote gender equality.”

The Director of the State Statistical Office (SSO), Apostol Simovski, welcomed the creation of the Index of Gender Equality of the Municipalities, and also announced the SSO’s preparations to create a National Index of Gender Equality, which will provide a comparison of the  situation in Macedonia with the countries of the European Union and the rest of the world.

The results of the status of gender equality in the municipalities were presented by representatives of Reactor, who emphasized that this review  emphasizes the need for local investment that takes into account the specific needs of women and men and allows improvement in women’s lives, thus advancing gender equality and the lives of all citizens in the country.

The Reactor team believes that this tool will motivate municipalities to create policies that focus on women’s needs, and thus achieve better results in the next assesment of the Index, which is planned to be implemented in 2020.

The event was attended by more than 90 representatives from several municipalities in the Republic of Macedonia, relevant institutions, embassies and civil society.

The full assesment of the gender equality in the municipalities is available at www.rodovindeks.mk.