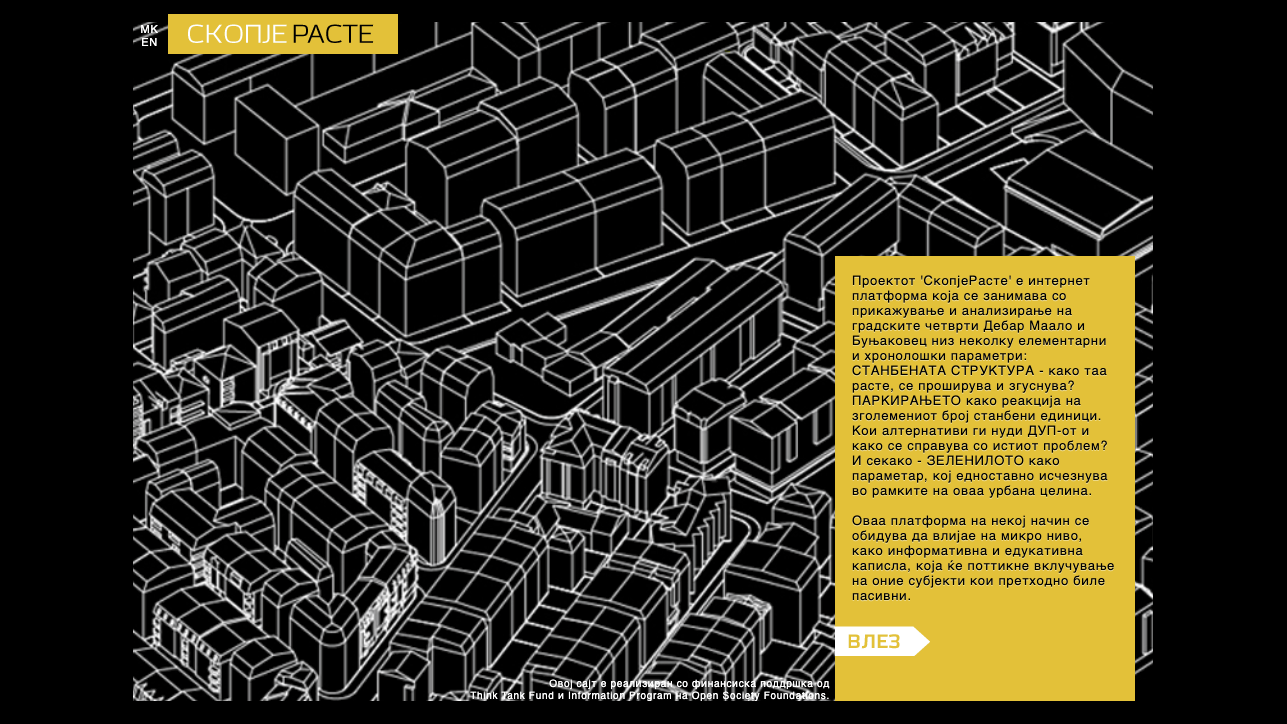 SkopjeRaste (‘Skopje is Growing’) is an initiative that aims to encourage a debate about the vision of the city of Skopje that would include the interests and the needs of its citizens. This platform is our contribution to including the citizens of Skopje in a wider debate on urban development, presenting the urban plans and the growth of the city in a visual way, equally accessible to citizens and experts alike. This research project was inspired by the idea that the meaningful participation of citizens is only possible if they have timely access to the city plans, presented in a user-friendly and accessible on-line platform.

This platform allows citizens to get informed about the changes happening in two neighborhoods in the center of Skopje, both chronologically and based on a number of parameters, i.e., urban elements (buildings, green spaces, parking, illegal builds). The chronological layers give citizens insight into the future appearance of the city. The year 2020 is presented in a way that allows citizens to see what the city will look like if the current detailed urban plan is executed to its full extent. We hope that by providing these striking visualizations we will encourage the increased involvement of citizens in the planning processes and decision making that are important for their direct surroundings and city as a whole. The articulated and precise description of the problems can bring municipalities closer to citizens and help the authorities in implementing the detailed urban plans, which are a product of a complex network of information that attempts to keep up with the constant changes in the city processes.

We hope that the local government will embrace this idea and that it will encourage them to consider upgrading this platform and its use in the future growth of the city. Considering that the new general urban plan was adopted recently, the municipalities will have to synchronize the detailed urban plans by 2017. We hope that these processes will be much more transparent than they currently are and that this platform will provide the opportunity for a different, more inclusive debate with the citizens during these processes. We are convinced that only responsible, active and informed citizens can revive the civic spirit and we hope that SkopjeRaste will contribute towards the achievement of this goal.