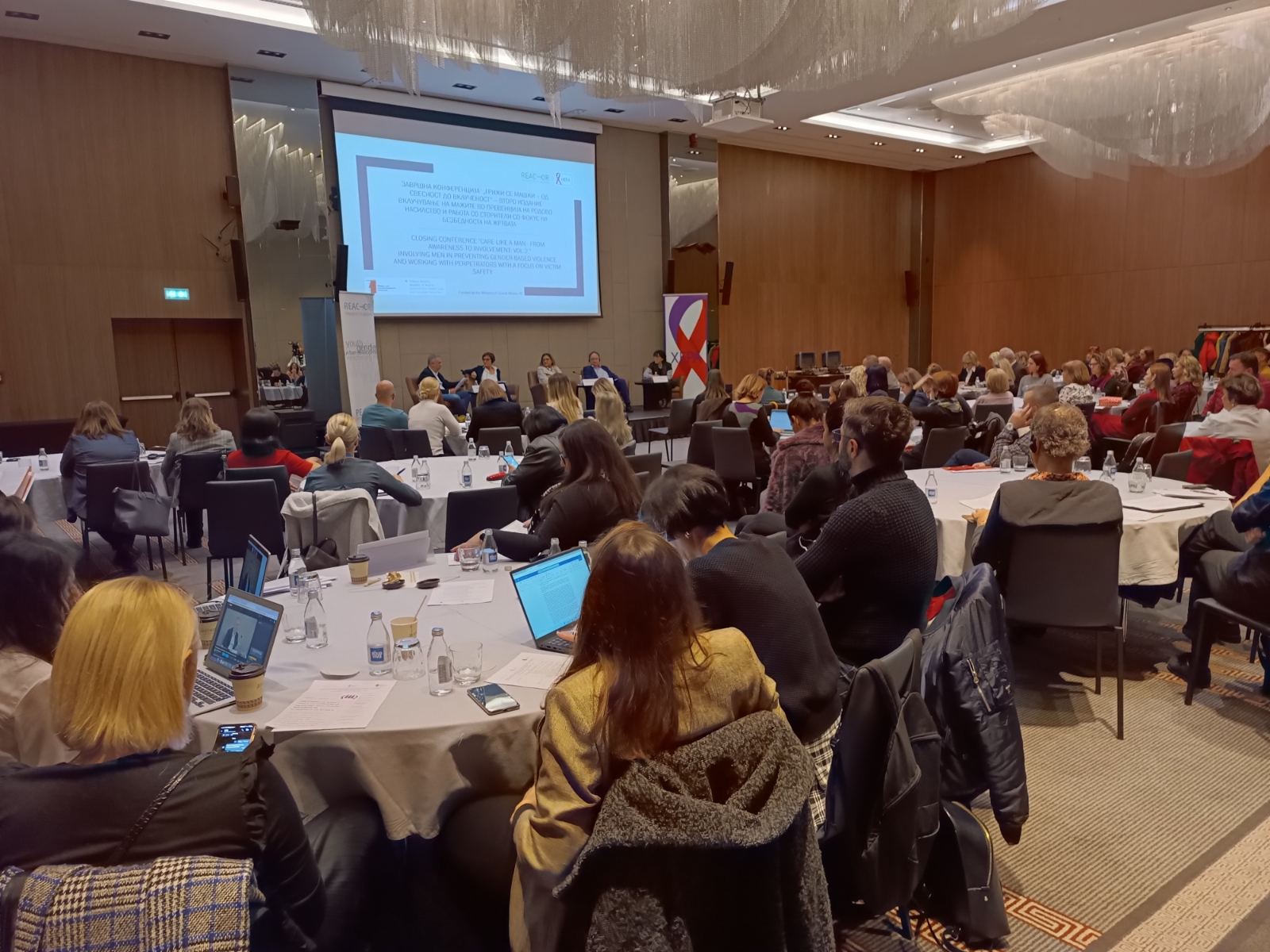 Yesterday, November 22, 2022, the closing conference under the title “Care like a man – From awareness to inclusion: Inclusion of men in the prevention of gender-based violence and victim-safety oriented work with perpetrators” took place, organized by Reactor – Research in Action and HERA – Health Education and Research Association.

“The challenge of gender-based violence against women is not merely personal, nor is it a relational one; this challenge is profoundly social, culturological and societal, requiring complex solutions. Day after day we become increasingly aware that, if we want to prevent the violence, we should not only work with the victim, rather, we should work with the perpetrator, too. It takes rehabilitation, education, and also support, both for victims of violence and for perpetrators”, said Jovana Trenčevska, Minister for Labor and Social Policy, in her welcoming address to the conference participants.

Bojan Jovanovski, HERA’s Executive Director, addressed the issue of toxic masculinity, which is omnipresent and equally harmful to both men and women. “Our society is a traditional and patriarchal one, and the masculinity displayed around us is basically violent and dominant in its power over women. It’s disheartening to see this toxic masculinity being normalized, be it at home, in the media, at school, or in the public space. Very little is done, especially in terms of systemic arrangements, to change it, above all, in view of reducing the violence, the victims of which, most often, are women and girls.”

A welcoming speech was also given by Harald Fugger, the Attaché of the Austrian Federal Ministry of Social Affairs, Health, Care and Consumer Protection to North Macedonia, as well as Elli Scambor, Director of the Association for Men and Gender Issues of Styria.

The first panel discussed the multi-professional prevention of gender-based violence, victim-safety oriented work with perpetrators, and men’s counselling opportunities in our country. Briefly presenting the state of affairs and the analysis of the local resources and needs in respect of this issue, Tanja Ivanova from Reactor underlined that majority of respondents involved in the online research with key stakeholders in the country believe that men and boys can be included in the prevention of violence by setting up specialized centers that will provide free psychosocial support (67%), and launching SOS hotlines for assistance to men and boys (60%).

Focusing on the importance of developing programs which will teach men how to resolve problems without resorting to violence, Vesna Matevska, HERA’s Program Manager, presented the two action plans, on prevention of violence and on work with perpetrators of violence, outlining the specific activities to be implemented by the competent institutions by 2027. Moreover, in the second session, she and Bojan Jovanovski of HERA, presented the National Concept Note which provides practical guidelines on how to set up a men’s support center.

The floor was later taken by Slavica Mirčeska from the Ministry of Education and Science, who referred to the institutional efforts and the importance of gender-sensitive education; Prof. Dr. Dejan Ajduković, psychologist from the Croatian Society for Psychological Assistance, who highlighted the benefits from working with men and boys in preventing the gender-based violence; Moritz Theuretzbacher and Nadine Lampel from the Association for Men and Gender Issues of Styria, who shared their practical experiences with introducing caring masculinity in the work with perpetrators; and Lidija Šterjov from the Ministry of Labor and Social Policy, who reiterated the institutional efforts to include men in combating violence and the new centers for counselling and work with perpetrators.

The conference was closed by Ralf Puchert from the Association for Men and Gender Issues of Styria, who, outlining the next steps, emphasized the importance of securing adequate financial resources for combating violence.

This event is part of the project “Establishment of multi-professional prevention of gender-based violence, victim-safety oriented work with perpetrators and men’s counselling in North Macedonia“, commissioned by the Verein für Männer- und Geschlechterthemen Steiermark (Graz, Austria) and based on financial support from the Austrian Federal Ministry of Social Affairs, Health, Care and Consumer Protection.