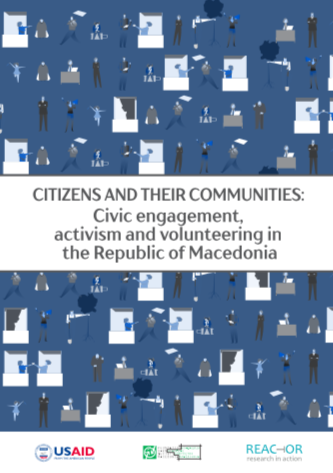 This study looks at civic engagement in the Republic of Macedonia in the period from 2012 to 2016 among the population of prime working age from 16 to 66. It focuses on civic engagement from four different aspects. Firstly, it focuses on engagement in civic initiatives for the common good, i.e. citizens working together on actions aimed at improving communities. The second aspect is the aspect of civic activism, i.e. the attempts to solve various social problems in collaboration with the authorities, or by engaging in public hearings, working groups, civil protests, petitions and by submitting complaints and proposals. Thirdly, it looks at conventional civic engagement, i.e. voting in parliamentary, local and presidential elections. And finally, it looks at volunteering, i.e., providing unpaid help to individuals and organizations.